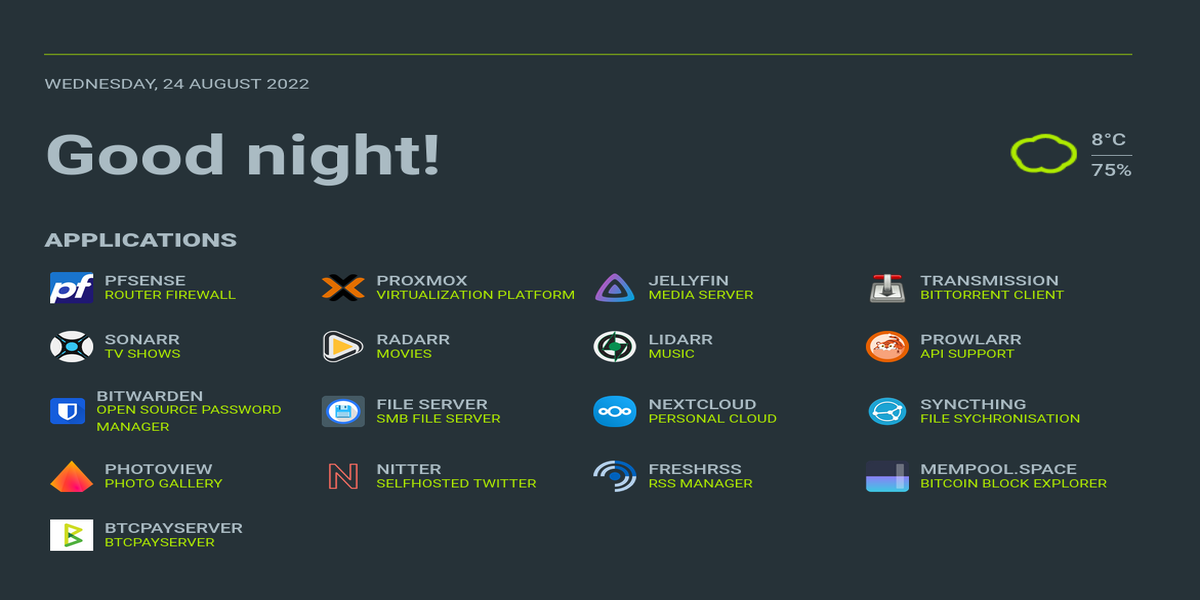 I have been tinkering with my home server throughout the winter. I wanted to share my setup and how I go about self hosting the services I run on my network. It's a fairly simple and clean set up, but I've spent quite a while learning and tinkering over the years.

The hardware I am using for my home lab is a Dell Precision T7810. The specs are as follows:

I picked up this computer (minus a few of the SSD's) secondhand from Facebook Marketplace for $800. I purchased it almost a year ago.

The operating system this machine is running is Proxmox. It's a linux based operating system that specialises in running virtual machines (VM) and containers (CT), but it also manages your disks, backups and so much more. It is predominantly controlled using a web based graphical user interface.

Proxmox is installed on the 1TB SATA SSD. Its default configuration was to use 100GB for the images/iso files and 900GB for running containers and virtual machines.

The 500GB SATA drive is used to saved weekly backups. I have configured Proxmox every week to shut down all CT's/VM's, create a backup image, save it to the 500GB drive and start the CT's/VM's back up again. This was easily configured in the web user interface.

The 2TB M.2 NVMe is used for my main storage. It is set up as a single ZFS file system with compression enabled. I've named it "zfspool". It holds documents, PDF's, personal videos and photos, notes and more. Sensitive documents are encrypted using Cryptomator.

The 240GB SSD is used as a media storage. It's also set up as a single ZFS file system with compression enabled. I've named it "zfsmedia". It holds Movies and TV shows. I don't need much storage for this because I tend to delete the files after watching. I'm not really one to hoard music, movies and tv shows.

I highly recommend this crash course from LearnLinuxTV on Proxmox. It is a fantastic series, and gets you up to speed with what this operating system can do.

I run quite a few containers and VM's. I'll go through them each in a bit of detail so you can understand what I use it for. Each of these is a mini project in itself for you to dive further into, if you're interested.

In any home network, you'll want to have a network storage where users can save and access all their files. This file server creates a samba share so anyone on your network can use it (with username/password authentication). In order to do this, I'm using the TurnKey Linux File Server image. This makes setting up a file server much easier, and you get a nice graphical web interface to manage it.

Any good home network should have a great media server, packed with the latest Movies, TV Shows and Music for the household to consume. I use an Ubuntu server proxmox container to install the following software.

One of the other cool things about this container is that I can use the NVIDIA graphics card to perform GPU hardware transcoding. Essentially, this reduces the load on the CPU when playing back files at a lower quality resolution when bandwidth is an issue. I've linked the video tutorial in the resources section for instructions on how to do this.

Nextcloud is a great place to store your documents. Think of it as a replacement for Dropbox/iCloud/Google Drive/OneDrive. Not only do I use it as a cloud storage replacement, I also use it to synchronise my contacts, calendar and notes. If I ever need to edit a document, I can do it through the web interface directly on Nextcloud.

I've got an Ubuntu server container set up in Proxmox that has Nextcloud server installed on it. I recommend the LearnLinuxTV tutorial linked below to get the Nextcloud instance up and running.

Vaultwarden is a fork of Bitwarden that allows you to self host your password manager. Instead of keeping your data on Bitwarden's encrypted servers, you can host your own using Vaultwarden. I integrate my own instance of Vaultwarden into my browser (via the Bitwarden extension) and into my phone. It quickly allows me to access my passwords and auto-fills the login details.

Photoview is a lightweight photo content manager that I use to access my photos. It's got great functionality - albums, maps, user management, people tagging. Photoview scrapes all the data from my photos folder in my samba share and delivers them to me in a nice web and mobile web interface. The downside is that there's no native Android app (only iOS). I synchronise the camera folder on my phone with an android app called SMBSync2. It synchronises and uploads the contents of my phone to the samba share. Photoview then scrapes that new data and delivers it in the web graphical interface.

There are many photo management alternatives. My commentary on other popular ones below.

Refer to the resources for a full comparison chart.

This is my go to search engine for searching the web. No trackers and profiling. Aggregates results from various search engines and databases (not just Google). It has a very nice and clean interface. I've set all my browsers on desktop and mobile to use this search engine, hosted in a proxmox container.

To keep up to date with all sorts of topics, I use RSS feeds to quickly get the information and notifications I need. This keeps me up to date on the release of software, blogs, youtube videos from my favourite content creators and news sites. FreshRSS scrapes the RSS feeds and the RSS feed reader on my devices will synchronise what I've already marked as read. I typically use newsboat for desktop and Readrops for mobile. In my browser, there's also a bookmark link that will find the RSS feed of the site and load it into FreshRSS.

Syncthing is a tool I use to synchronise important files across multiple computers. I use a proxmox container to install syncthing as a service, with my devices (laptop, desktop, mobile) synchronising to the folder. So essentially, I have plenty of copies of that folder should a device break. I also have a computer at my parents place that synchronises files for added redundancy (off site backup).

Bludit is a way for me to create content and host my own website. I currently run k3tan.com and ministryofnodes.com.au as a Bludit website. It's fast, lightweight and gets the job done. I'm also running Umami on this virtual machine. It provides me with insights into the traffic that is coming through to my two websites.

Matrix is great for decentralised, encrypted chat. I host my own matrix server and connect up to other matrix servers. I use a proxmox container to install matrix-synapse from the apt repository (link in the resources section). I also enable federation with serve_server_wellknown: true in the homeserver.yaml file located in /etc/matrix-synapse folder. I use a postgresql database rather than the default mysql, improving efficiency. Link for this is in the resources section. I also expose port 8008 to my domain via a Cloudflare tunnel. This protects my real IP address from being exposed.

I run a few other containers and virtual machines.

The most notable area for improvement is the disks. The Dell Precision T7810 tower doesn't really have space for more drives. The motherboard has six SATA ports but only 2 drive bays. I'd like to explore RAID technology to make use of multiple drives and mitigate against disk failures.

Another area I'm keen to explore is security cameras. I'd like to install ZoneMinder (there's even a turnkey linux image for it) to create a dashboard of security cameras that will one day reveal who's dog keeps shitting on my front lawn. After I find out who it is, I'm thinking I might go full Billy Madison one day. Put it in a paper bag, leave it on their front porch, light it on fire, ring their doorbell and run away.

You'll notice that I run a lot of docker containers within my proxmox containers. I'd like to explore whether a software such as Portainer would make this a little more resource efficient or better managed.

Finally, I want to put the computer behind an uninterrupted power supply. This allow me time to safely shut down all the services and computer in the event of a power outage.

Accessing services outside of home

Accessing these services I've deployed from outside my home network (remote access) is done using Wireguard set up on my pfsense router. I'm able to tunnel in and obtain all the information I need. I'm also able to upload data from anywhere and store it at home, for example, photos from my phone are uploaded to the samba share for photoview to pick up and organise.

I can also remote control my media services. If I'm out and about and someone recommends me a movie or tv show, I'm able to queue up the download from anywhere and have it ready for watching by the time I'm home.

Over the years, I've come across great resources that have helped me along my self hosting and home lab journey. A list of great open source software recommendations here - https://github.com/awesome-selfhosted/awesome-selfhosted